In this game it is Legion against Khador, 50 points Battle. Dorian brings pLylith, WolfG brings his new favorite Vlad3 to the table.
Before the beginning of the game, terrain is placed, WolfG seems confident. 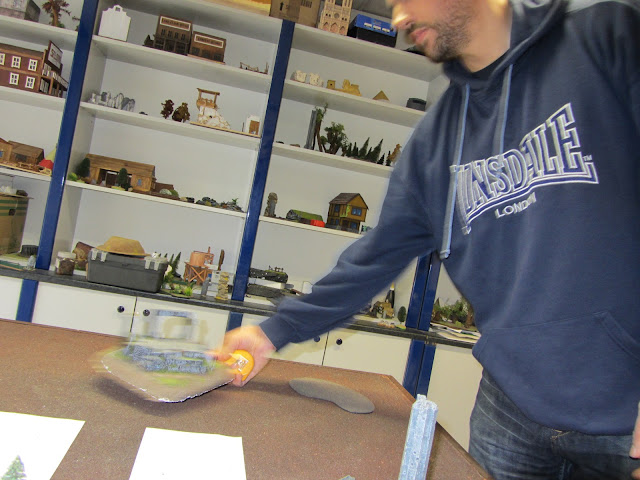 The final terrain for this game : two forests, a linear obstacle which provides concealment, and a small field that is rough terrain for small based models. 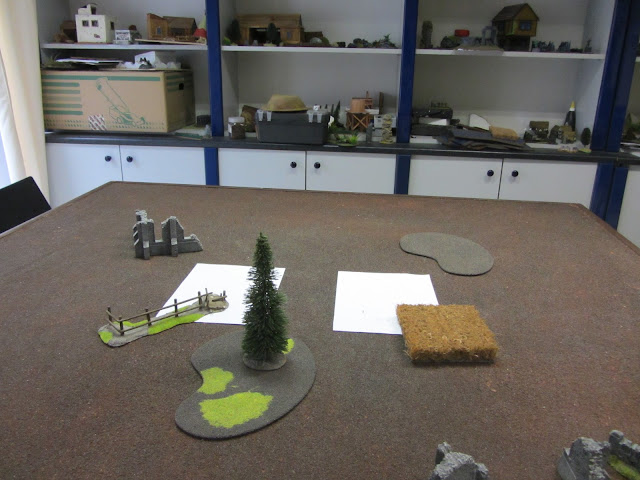 Dorian deploys his Legion, being very careful not to scare his own guys with the Forsaken ( abomination). 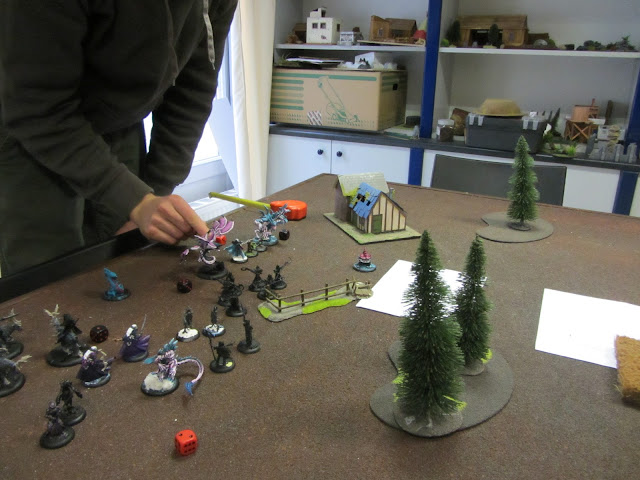 It does take a while, but the final placement is eventually found. 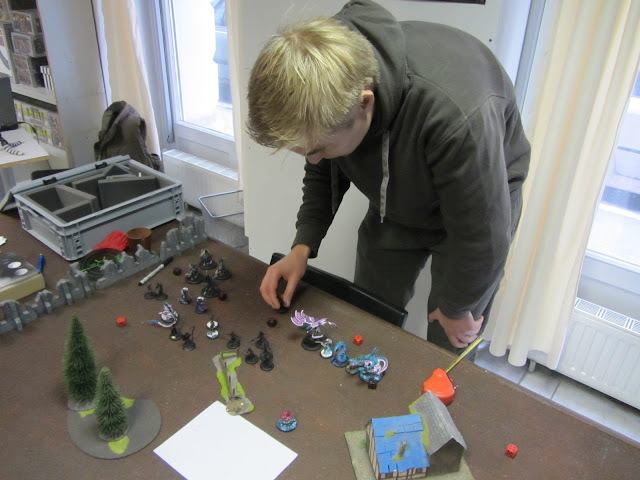 WolfG unpacks his army, all the while keeping one eye on the Legion deployment. 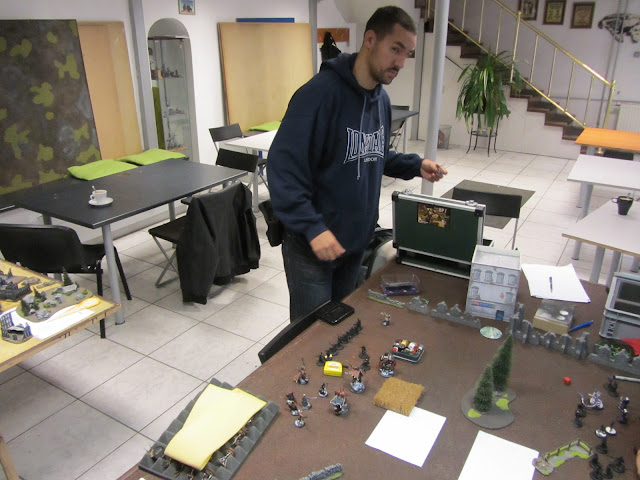 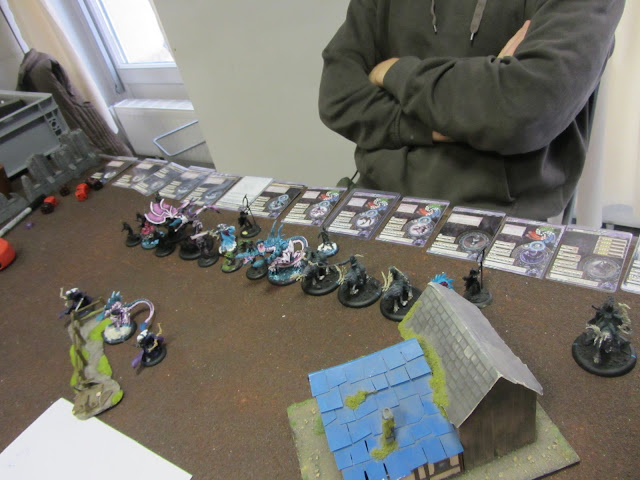 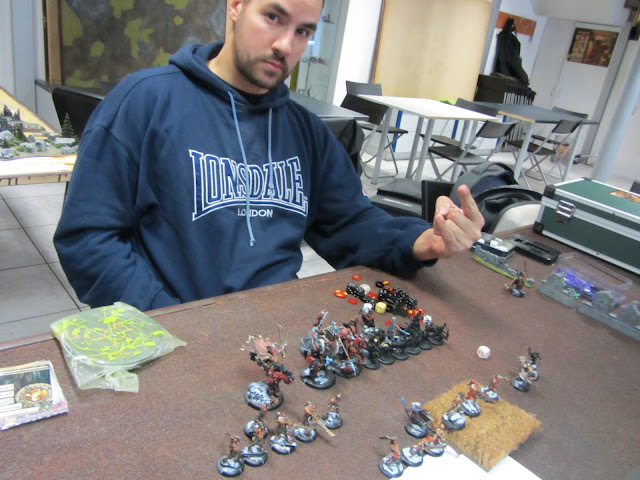 The Khador force is deployed and ready for battle. 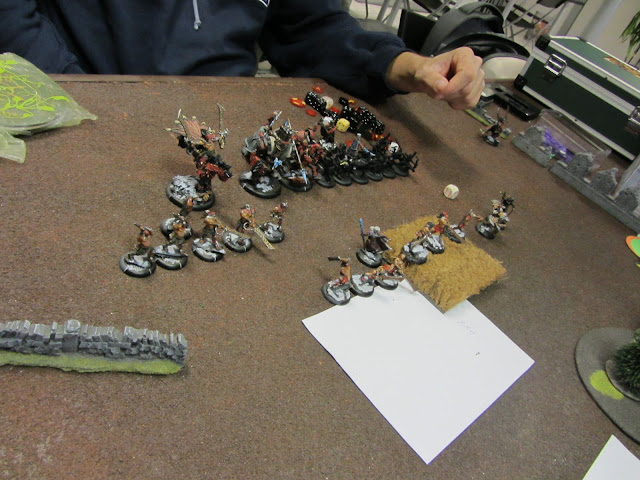 Special spotlight on 'The Pot', these guys could not kill each other last time to make enough blood tokens, will they succeed now? 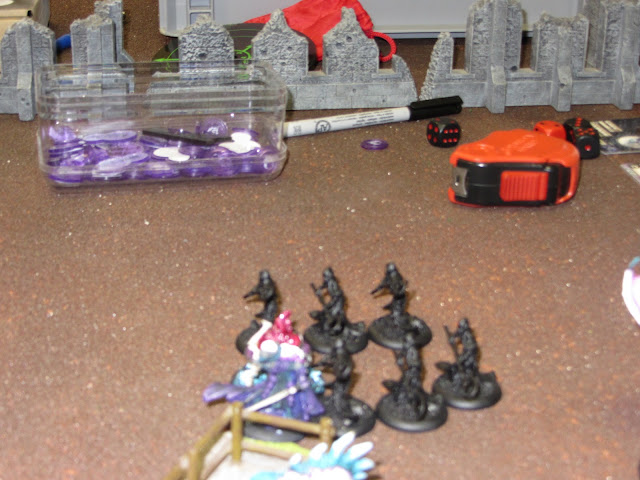 End of Turn One for Legion.
-Pot handlers killed each other, made one Shredder
-The Seraph Slistreamed the Spell Martyr 2" forward
- Spell Martir ran up 12"
-  Lylith wanted to cast Eruption of Spines on the Doom Reavers, but they could not be targeted by spells
- Teraph walked up and used his Animus Counterblast on himself
- The two Strider Deathstalkers moved up
- Typhon moved up 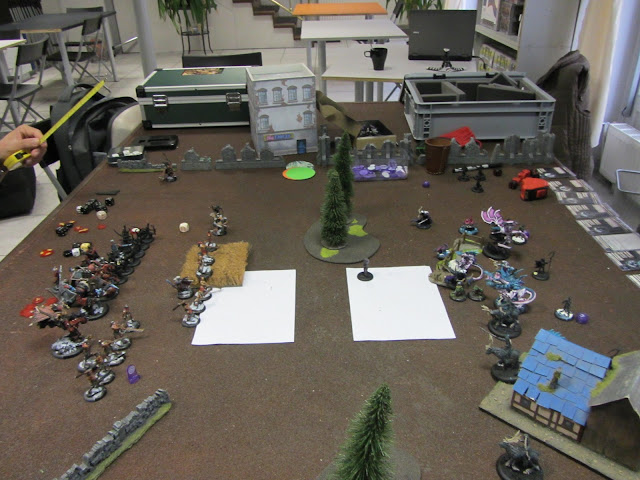 End of Turn One for Khador.
- Eyriss moves up, kills the Spell Martyr
- Doom Reaver Squad one runs up, they get shot by the Teraph, one DR makes his Tough roll
-Vlad moves up, casts Wind Wall, Infernal Machine on Beast09, Hand of Fate on the Nyss Hunters
- Everyone moves up, the Ternions put some clouds on the Nyss.
- The second unit of Doom Reavers, Beast09 are protected by Wind Wall. 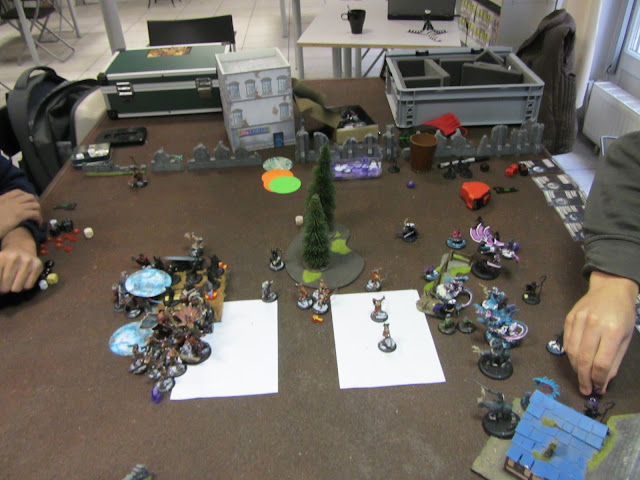 A close up from the end of Round 1. 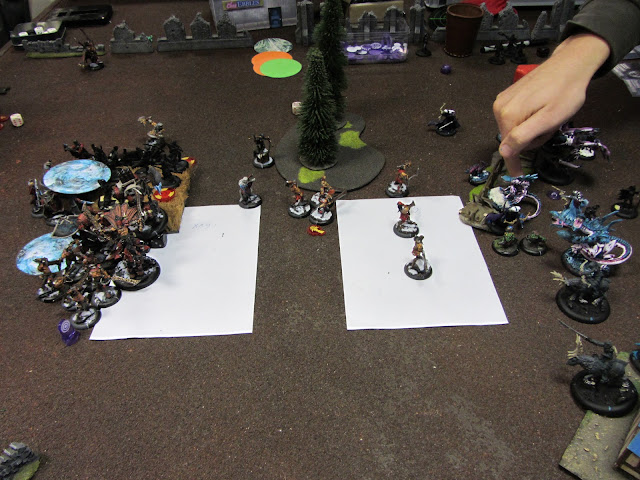 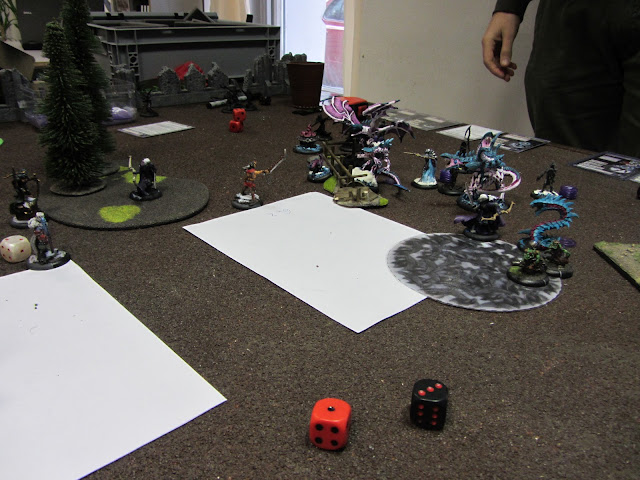 Overview of the table at the end of Dorian's Turn 2. 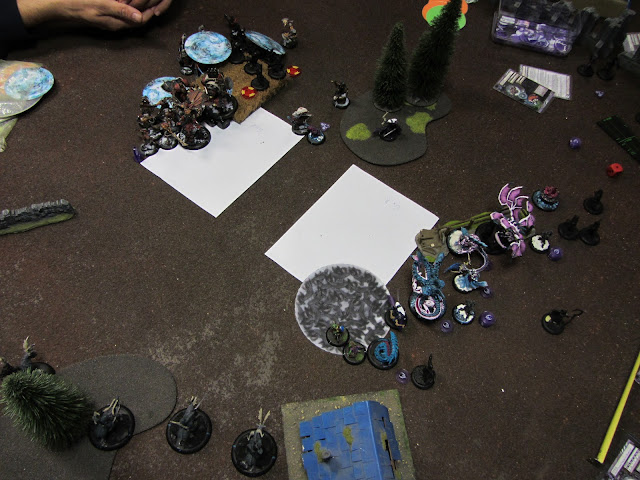 A Closer picture at the end of Dorian's Turn 2. 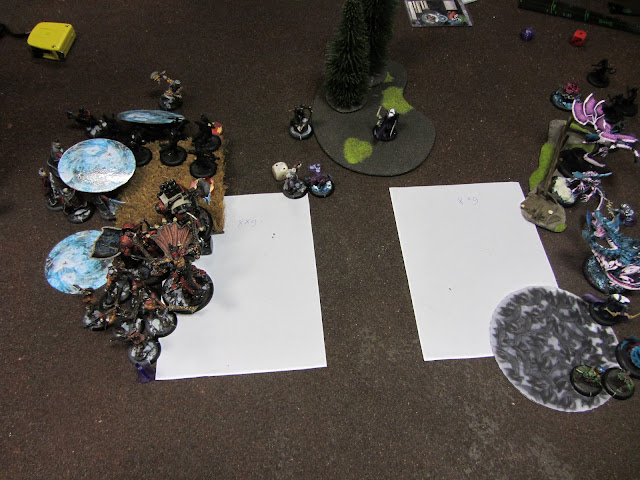 End of WolfG's Turn2.
- Vlad kills a Shredder
- The Greylord escort sprays on Lylith, does 5 damage
- Eyriss shoots at Typhon, removes his animus ( Excessive Healing)
- The Nyss advance and shoot Typhon for 18 damage ( single shots)
- The Koldun Lord Sprays the Deathstalker in the forest, misses
- Saxon Orik gives Pathfinder to the Ternions
-  Ternions spray the Deathstalker for 3 dmg
- Doom Reaver Unit 2 runs up with Dash and cause command checks on the other side, Deathstalker2 starts to flee !
- Fenris charges Anyssa and kills her. 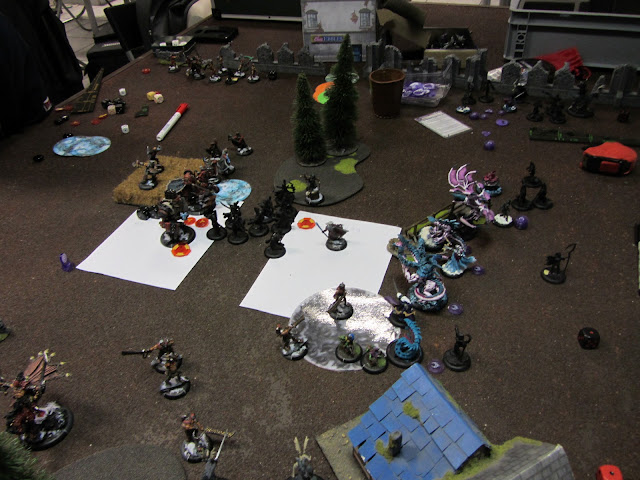 Another picture at the end of Turn 2 for WolfG. 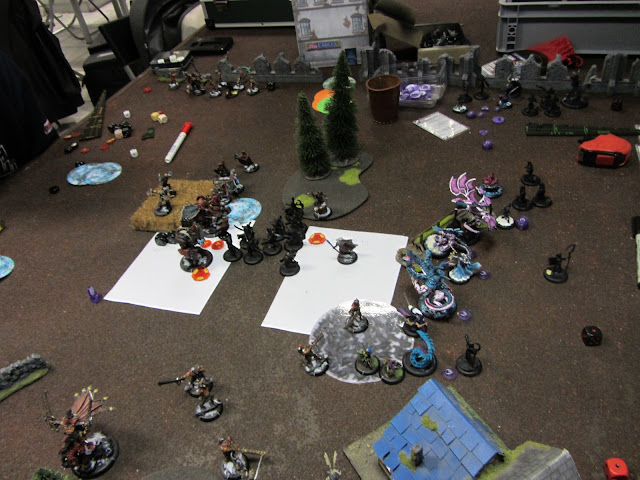 Dorian returns to the game after a bit of cursing. 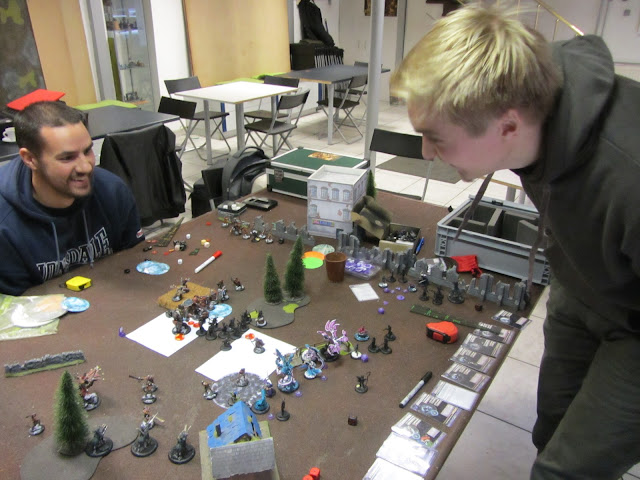 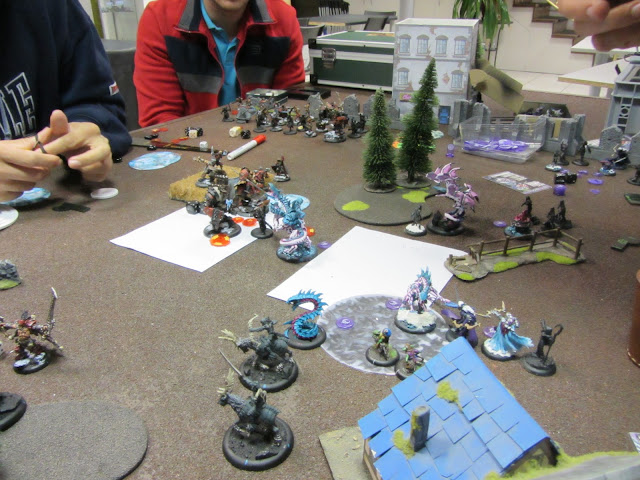 Shepherd moves up to block a charge lane. 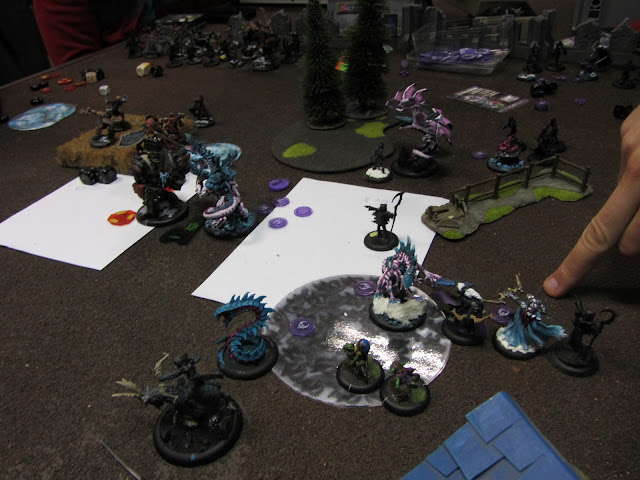 End of WolfG's turn 3.
- Doom Reaver kills the Raptor that dismounted Fenris
- Fenris charges the remaining two Raptors and kills them
- B09 moves up and does 12 dmg to the Naga and 5 dmage to the Typhon
- Saxon Orik charges Typhon and does 6 damage
- Vlad charges the Seraph, impacts the Forsaken but misses, does 12 damage to the Seraph, sidesteps to the Typhon, kills him and makes a Sprint move to get back to his starting position 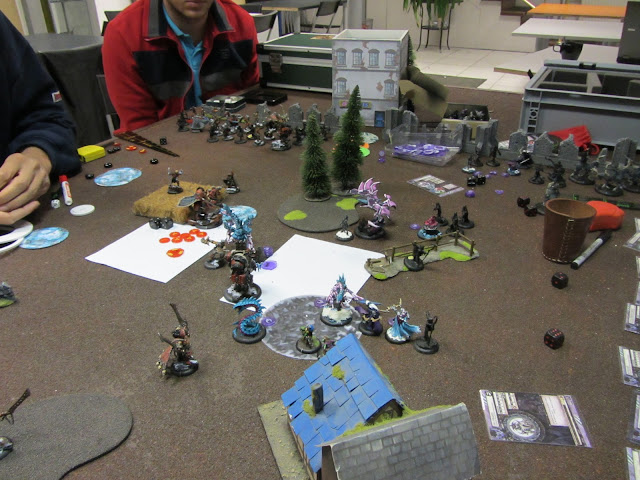 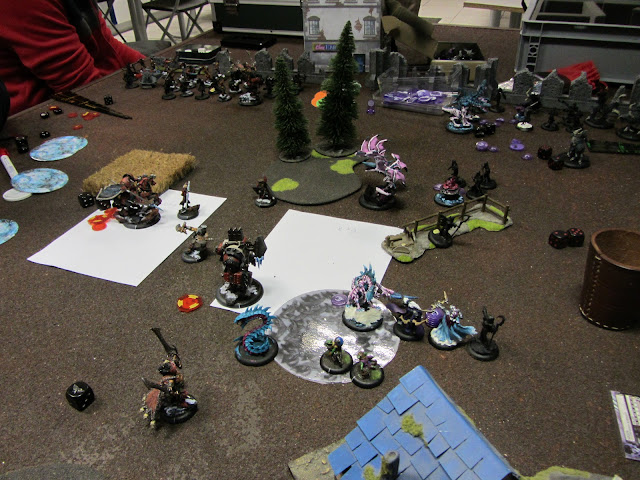 The Harrier gives up and flips over by the edge of the table. 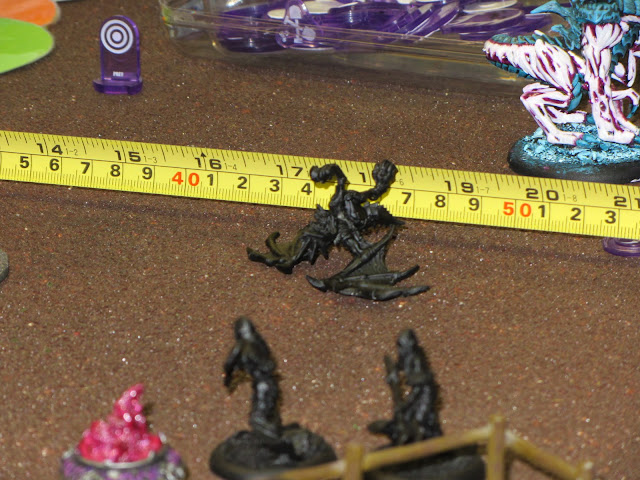 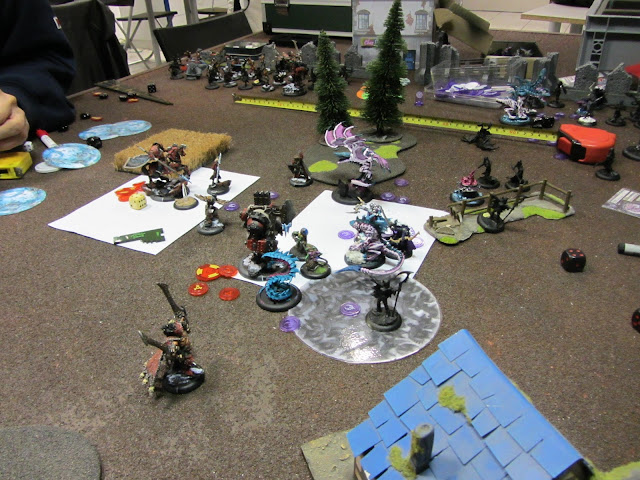 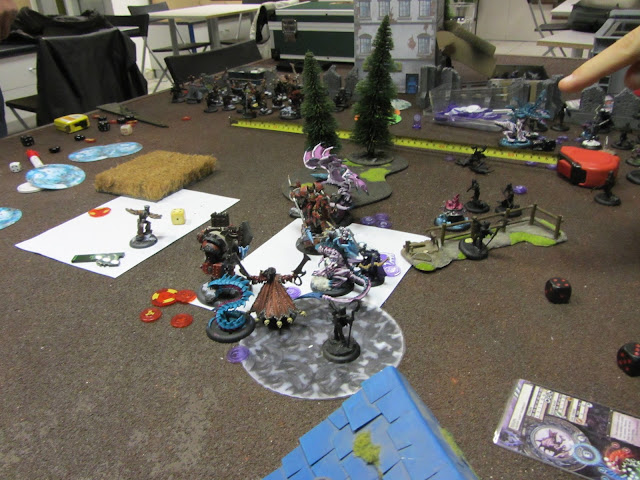